Two more manuscripts from the Biblioteca Nacional de Espana, both Parisian, have been added in recent days.

Vitr/24/1 was in the collection of King Charles VIII (see 259), and dates to the very end of the 15th century. It has beautiful calendar, complete in French and graded gold, red/blue. Surrounding the labor of the month, on the outer margin, there are short French poems about the month. The entries are quite a mess, however. 43 appear to be on the wrong date with an additional 27 entries unidentified.
(DB Id: 287)

Vitr/24/7 is an earlier book, dating from circa 1400 with an unknown patron. It is named for a 19th century owner, the Duke of Osuna. The calendar is complete, with an unusual grading system, gold and red/black. Like the other Parisian Hours, this one has a calendar filled with errors. 52 entries are on the wrong date with an additional 65 unidentified.
(DB Id: 280)

Another library joins the database with the addition of Ms.1185 from the Bibliothequè de l’Arsenal, located in Paris near the former site of the Bastille. This is a 15th C. Book from Cambrai, now in northern France. The book is in a very high quality bâtarde hand, with multiple flourished (nearly cadel) capitals in the calendar test. There are also illusionistic borders, with shell-gold backgrounds, on the outer edge of every page, both text and calendar, except for those with more complex decorative programs.

An interesting variant is the indication of the Epiphany (January 6 (1488)) (see f.1r below). In French calendars this is usually spelled as La Tiphaine (or a varient thereof), however in MS.1185 it is spelled in hybrid La epyphanie n[ost]re s[iegneu]r. The article is never seen in Latin calendars, but neither Epyphanie nor vocal variants, are seen in French Calendars. The closest match to this entry, oddly, is the early 16th C. Ventian calendar in Houghton MS Typ.1000 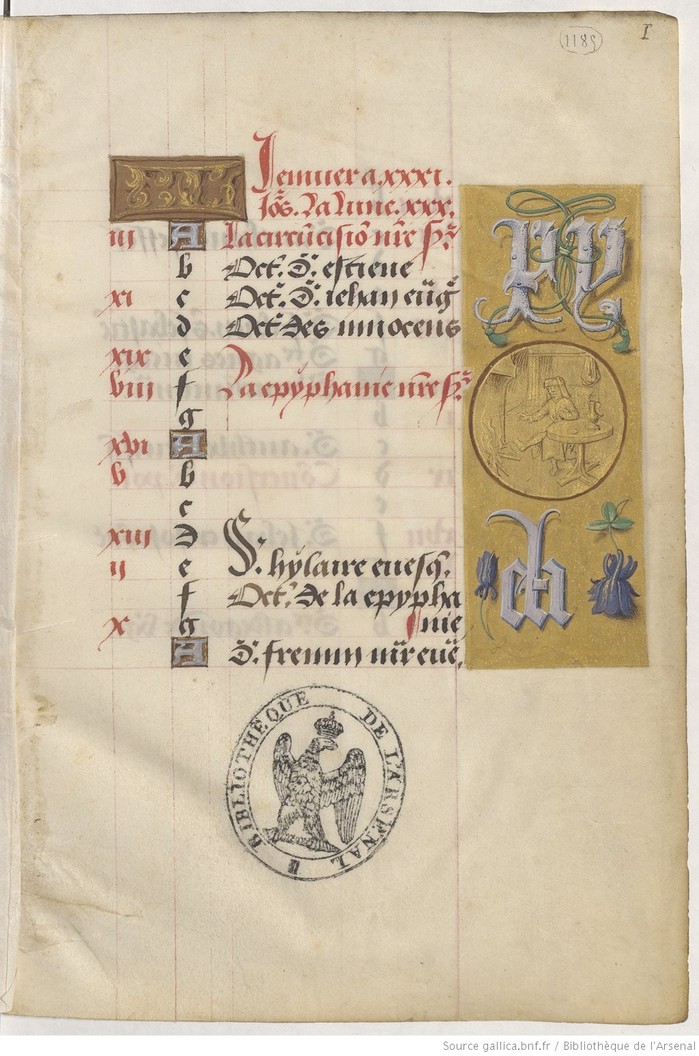 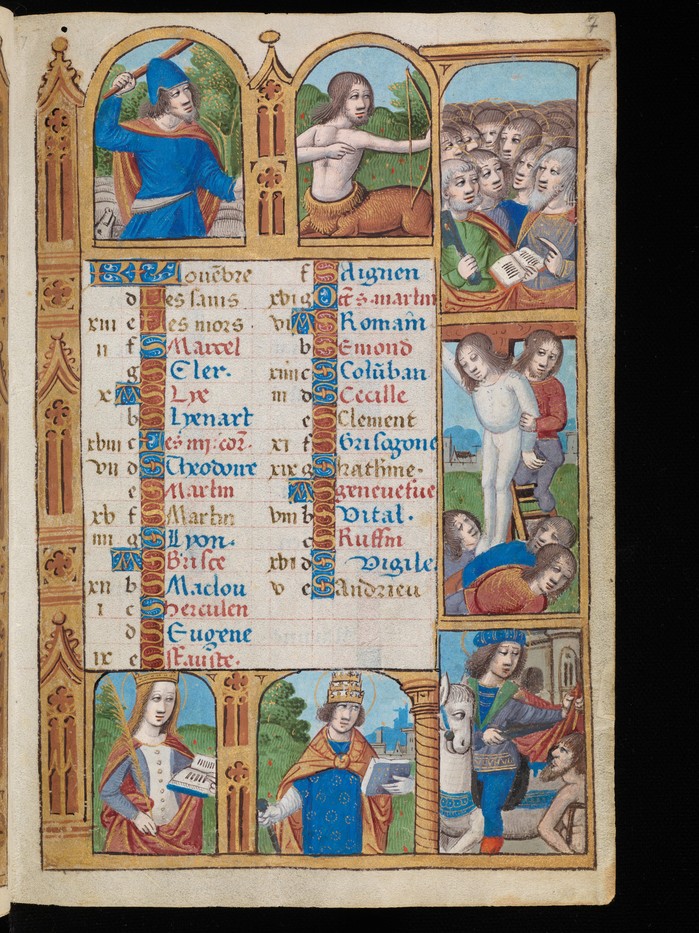 Bibliothèque nationale de France Nouvelle acquisition latine 3093 is one of the multiple fragments of a complex manuscript, which was owned and possibly comissioned by Jean, Duc de Berry (yes, that Duc de Berry).   The BnF fragment, called the Très Belles Heures de Notre-Dame, is mostly Book of Hours content, but the manuscript originally contained a Psalter and some of a Missel as well.  Even without touching on the complex history of creation and illumination, the calendar is interesting in it's own right.  The entries are mostly standard for Paris, though there are a large number of local bishops specified with their See, (see  Sts. Savian and Potencian, October 19, on f.Vv below.  Their see of Sens is recorded).  There are also some of the specifically Parisian royal feasts, including both the Crown of Thorns (Aug. 11) and Relics of St. Chapelle (Sept. 30) and multiple kings and queens.

The coloring seems to have no pattern at all, sadly.  There are 4 colors used, red, blue, pink (distinct from the red, perhaps a faded purple) and black, which might be lost gold, and many of the feasts have size indications in the right margin (3 or 9 lessons, or Annuale), but there seems to be no correlation between color and rank.  High-rank feasts are often blue, but in November, where the month is mostly full, it seems to be a simple pattern (blue is roughly every 3rd feast), and St. Andrew, an apostle, is pink. 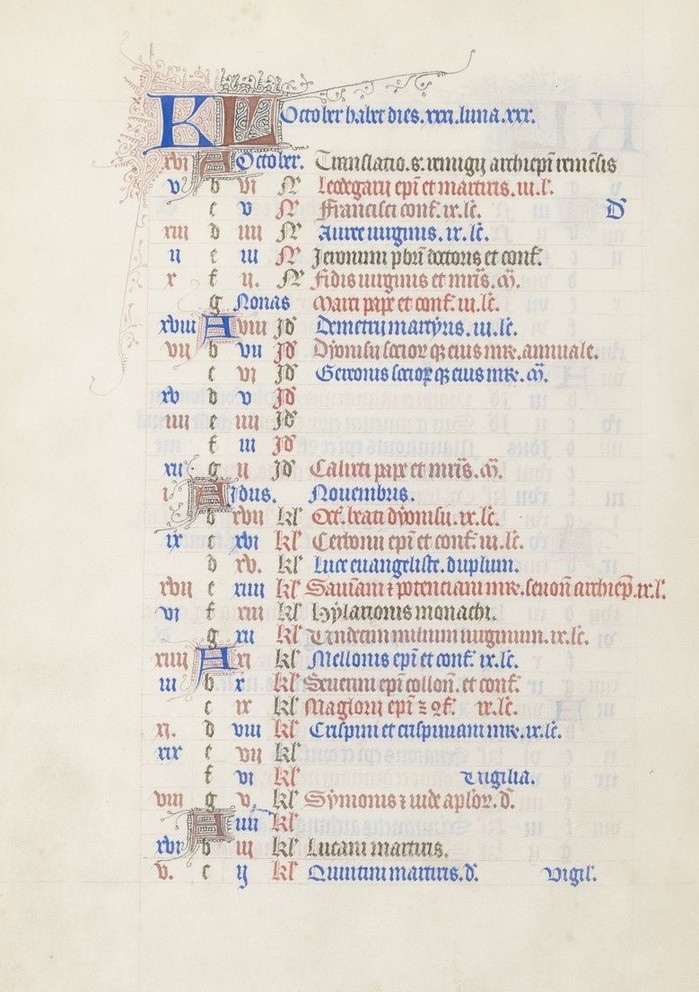 Morgan Library M.92 is another Book of Hours from my recent trip.  This one is a very early, 2nd quarter of the 13th century, French book, probably made in Paris but use of Soisson.  The first couple of leaves are full-page miniatures of the life of Mary, though only as it pertains to Jesus.  They start with the Annunciation and proceed through the scenes of Jesus' first year and then Crucifixion.  The last few are the death and accumption of Mary, and these are followed by the calendar, starting on f.15r.  This calendar is quite lovely, with rondels for both the labor and the zodiac on the outer margin, and bright gold for the parts of the Roman month (Kalends, Nones, etc)

The calendar is interesting from a scribal-practice sense, as the Lombard capitols, in red and blue, that go with most of the Saints were clearly done by a second scribe.  These are wrong quite often, and in ways that are so nonsensical, which is entirely different from the very careful and accurate main scribe.  Not all the errors are even on unusual saints, December 25th is "Sativitas d[omi]ni n[ost]ri ih[es]u [christi] in bethle[hem]e" (see f.20v below.  The tiny picture is the only one available from the Morgan).  The formation of the text in unusual, many more feasts are marked "passio" than one usually finds 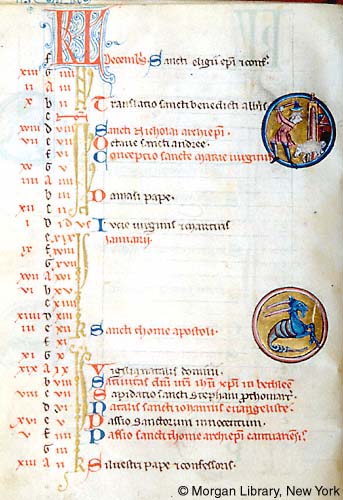 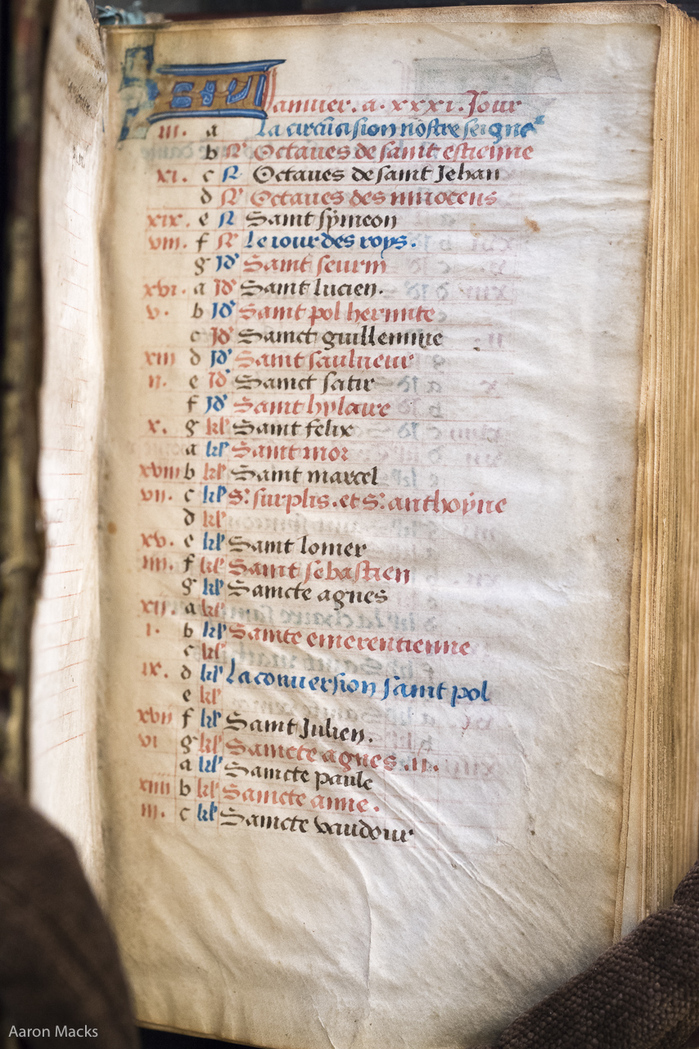