The "Saints by Date" page has been completely reformatted, using Foundation's Accordion as the main layout scheme and block-grid for each month.  It's WAY less template code and actually works on a small screen, rather then just pretending.  Currently there are still issues with the boxes around each day in the medium and large views, but that's on the short list to be fixed. 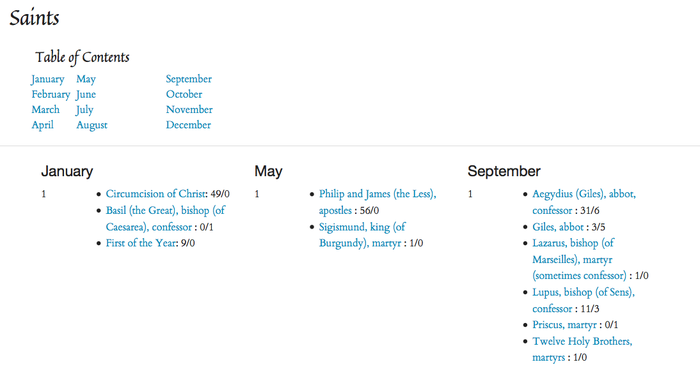 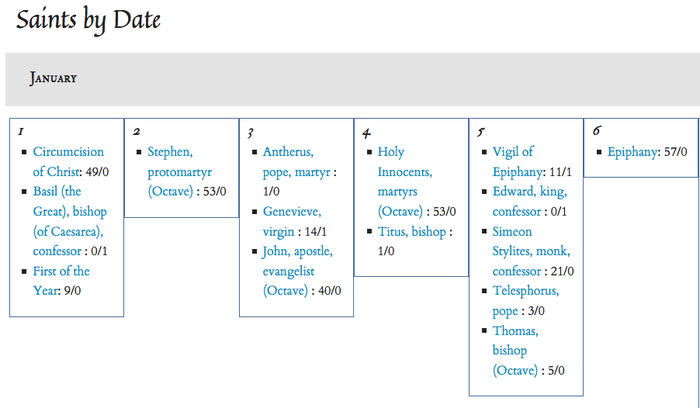 A personal code-victory, the entire layout was changed, and not a single line of code had to be touched.  I had sucessfully kept all the layout in the template and only had to touch that!

The More Saints the Merrier

a LOT of code changes in the last few days, (20 commits to git on the 5th alone):

All of this means that the image on the left is 1 week ago, and on the right is today:

A minor change in the content, work has started to get "secondary_saint_color" values for all the entries put in before that field existed.

The work of converting the site to use foundation as layout library is complete.  JQueryUI has been removed, everything is now formatted with Foundation and all popups are controlled by it.  We are still using manualy HTML tables for a lot of formatting, but at least we're consistant in appearence.  One caveat, due to the removal of support for AJAX Modal pop-ups in Foundation 6, we're currently running in 5.5.

Note that jQuery is still part of the application for loading remote content, it's only the UI layer that has been replaced