With the addition of Vatican Reg.lat.165, we have verified that 4 saints in a single date now loads and processes correctly.  Taking a step backwards, this is a Use of Rome hours with a Calendar from Aquilla (probably) that may have been owned by Queen Christina of Sweden.  The calendar is either unfinished or the scribe was confused, each entry is missing the initial letter, eg. "pyphania do" for Jan-6, missing the initial "E".  For testing, though, August 22 (see f.6v below) is the critical date, having entries for Sts. Hyppolitus (471), Timothy (478) and Symphorian (477), and the Octave of the Assumption (469).  This was entered into the new 4-saint Excel template  and it loaded and displayed cleanly! 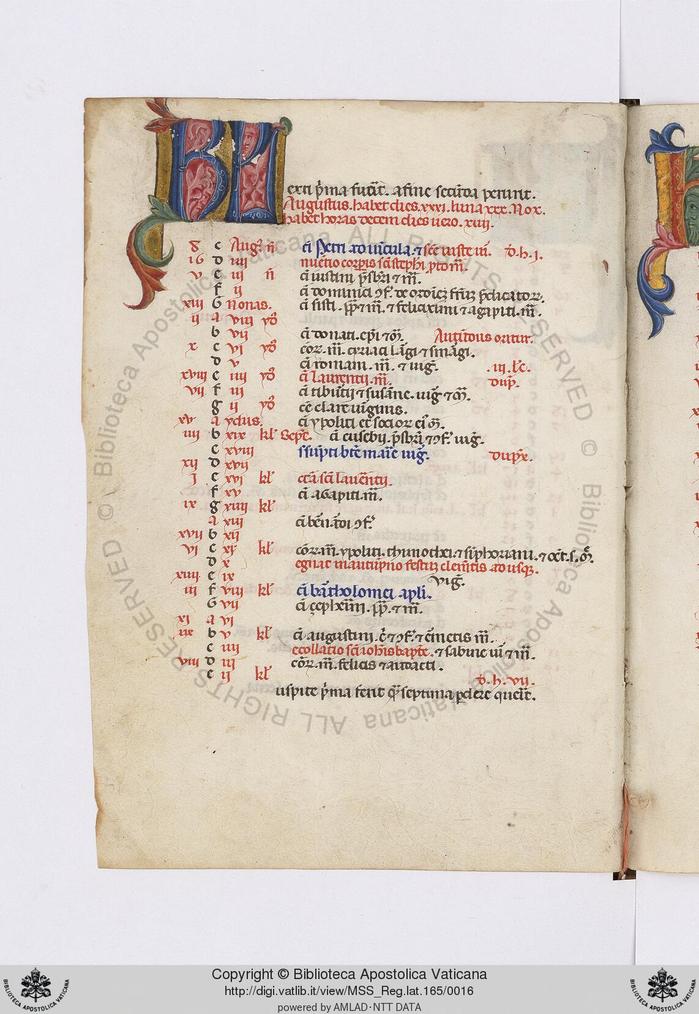 Walters Art Museum W.193 is a French book of hours, with an unusual liturgical use of Cambrai, dated to roughly 1450-1460. There is evidence that the initial owner live in Mons, Hainaut (now part of Belgium). The calendar has some light decorations on the recto, an outer-border of acanthus leaves, and has 200 dates populated, though a higher-than-usual number of errors in the dating of saints. There’s also an unusual case, Saint Germain on August 8(see f.11r below) is unidentified, but ranked high. So far no “Germain” or similar name has been found for that date, but hopefully future work can identify this high-importance saint. 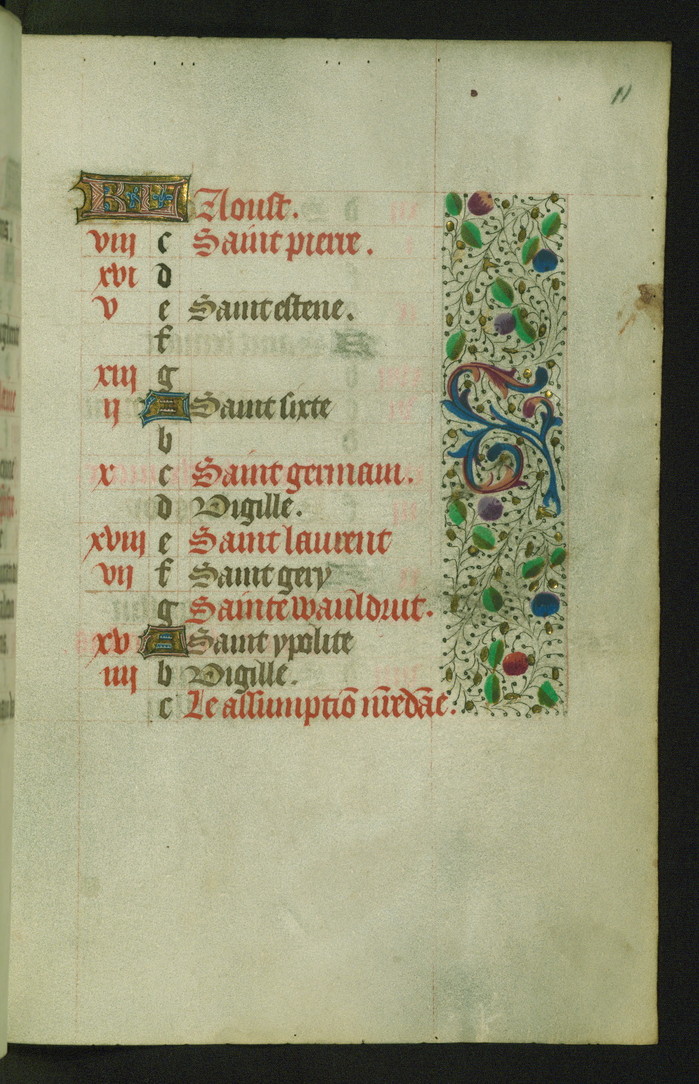 From Goethe University in Frankfurt comes Ms Lat Oct 110, a Use of Utrecht, Latin, book of hours from circa 1465.  It's not the most beautiful of manuscripts, but has some interesting details.  The calendar is nearly full, 350 days are populated.  There are a number of Utrecht-specific saints, most obviously August 25 St. Gregory of Utrecht (see f.10v below), and there are also a unusual number of numeric saints.  In addition to the usual ones, the Four Crowned Martyrs, Seven Sleepers, Seven Brothers and 11,000 Virgins, there are:

The obsession with numbers continues in the dating information, the calendar contains both Roman and Julian numbers for the dates, which is uncommon.  Both of these are written in Hindu-Arabic numerals, which is, so far, unique.  The golden numbers are still in Roman Numerals 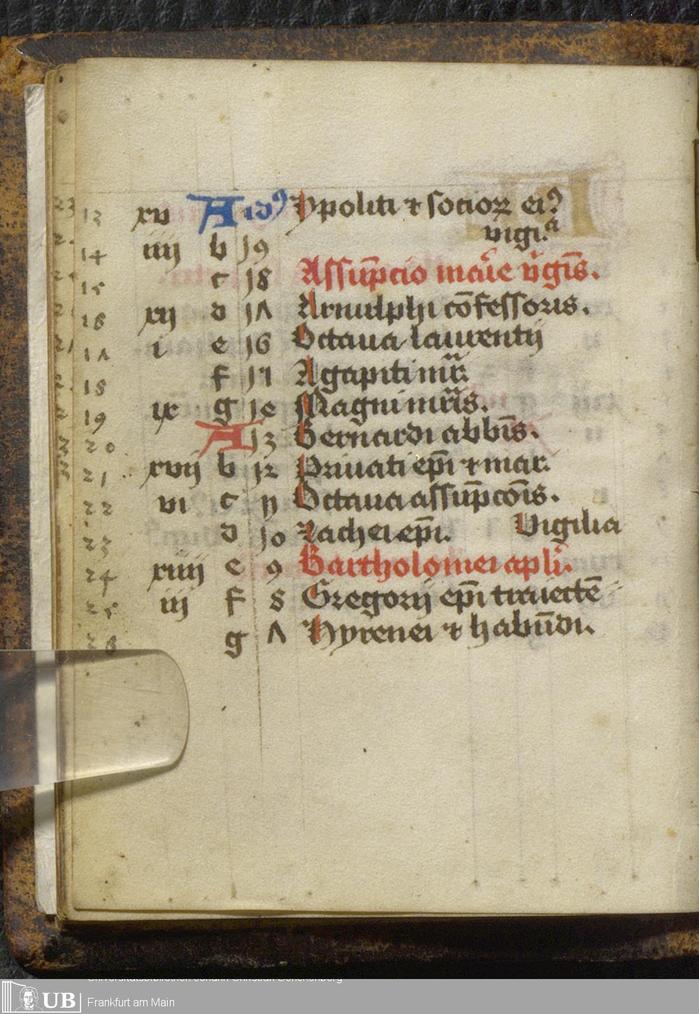 Walters MS W.88 is a very early (1300-1310) French book of hours with some unusual quirks.  The text of the calendar is in Norman French, some characteristic words being "Veske" (Evesque) for Bishop and the article "Li".  It has some very specific saints to the area of Cambrai, such as both the feast and the octave of St. Gaugericus (August 11 and 18th -- f.11r below), and some more broadly "French" feasts, such as new-years day instead of the Circumcision.  Each month has two vignettes for the labor of the month, many a bit more clever than the average, like the drinking harvester at the bottom of 11r below. 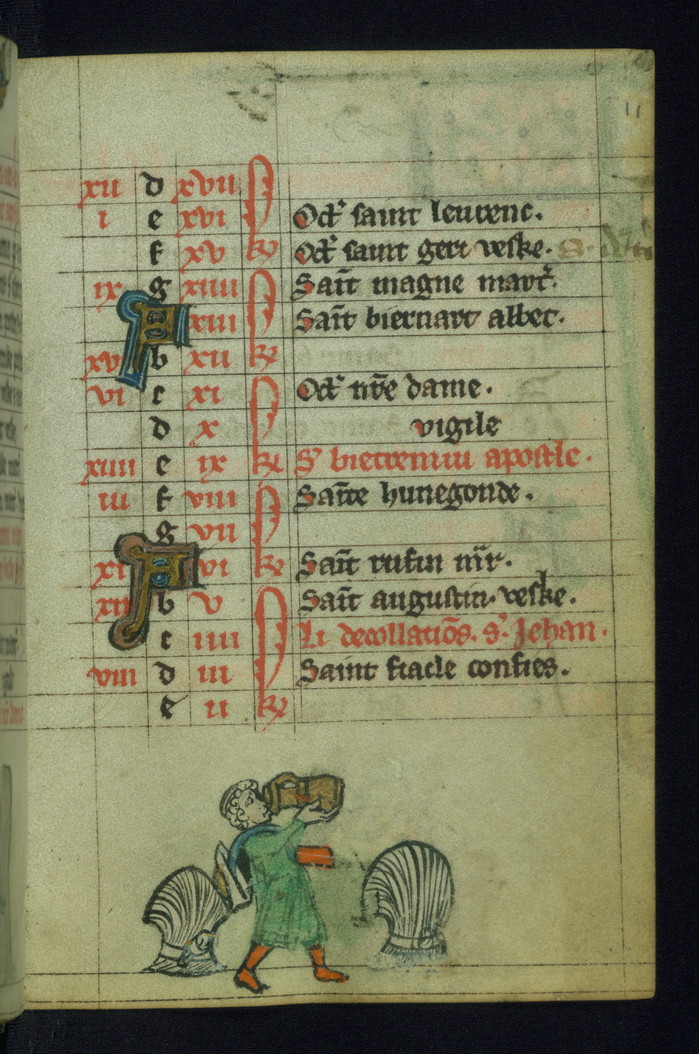 B.11.7 from Trinity College, Cambridge, is a fascinating late 14th C Book, use unknown, but probably Sarum.  It is both the most precise and most accurate calendar transcribed to date.  Saints are listed with ALL formal titles, as many as 3 per saint (see St. Augustine, Bishop, Confessor and Doctor on August 28th below), and every saint listed is on an attested date.  Dates also always give specific saint info, i.e. Translation or "St Thomas of Hereford".  The missing information is that few vigils, particularly on the first months of the year, are listed. 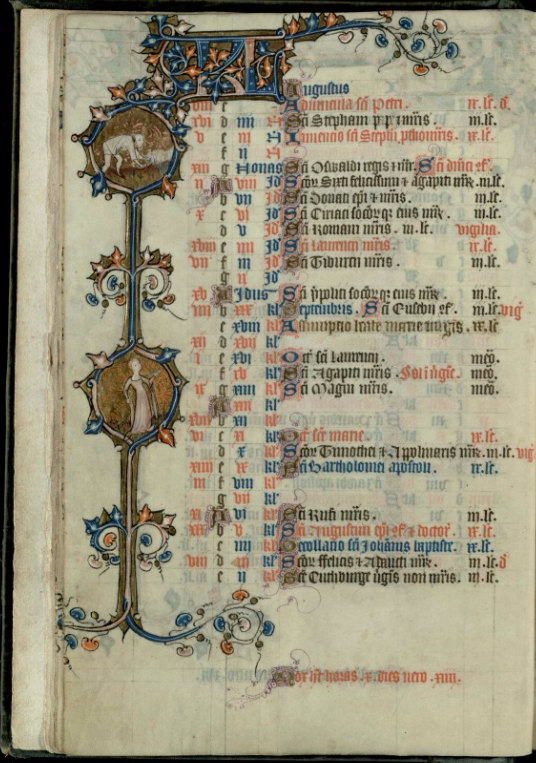