Morgan Library M.361 is one more of the Italian books of hours, this one from Florence.  The calendar is sparse, perhaps the least populated calendar I've seen so far, with only 118 entries.  The entries are a perfect case study for localizing a calendar though.  Most of the entries are the extremely common ones, Apostles, life of Mary, Jesus and John the Baptist, etc.  There are 3 hapex saints, however, in early summer:

Of these the first is localized to Florence (Zenobius is regarded as the first bishop of Florence) and the other two to Fiesole, 5 miles from Florence proper.

We've not yet run out of Italian books from the Morgan Library.  M.305 is localized to Florence, dated circa 1495.  The calendar is nearly complete, containing 340 entries and all 12 zodiac entries, so only 12 empty lines.  It also has a unique color scheme: red for normal, blue for high rank feasts and gold only for vigils (all vigils are gold) and the Zodiacs. The last 2 entries in September (Michael the Archangel and Jerome) are unusual, they're red, but with a gold initial.  There's a manicule pointing to Michael, perhaps an indication of one of the previous owners.  The calendar is filled with errors

Finally there are many unidentified saints, but it is unclear if these are in error or too specific in localization to be recorded in the more general reference materials.  The hand is a lovely Humanist, with regular capitolization and mostly regular gendering of titles (Sce vs Sci vs Scor[um]).

An interesting postscript, this MS was rebound in the early 20th century by Marguerite Duprez Lahey in a lovely, if overly tight, light brown Morocco.  There's an outer case in 1/2 leather, 1/2 marbled paper.  The later matches the end-papers

Morgan Library M.56 is a tiny northern Italian Book from the second half of the 15th century.  The hours are illuminated in the somewhat florid late Italian Gothic, but the calendar is quite plain, with just a simple blue KL at the start of each month.  The saints represent the usual ones, with some specifically Italian additions.  There are also two oddities, both the entry for Feb 25 (St. Constantine) and for May 13 (Pope Theodore) list them as Virgins, rather than bishops or popes.  It is possible that other saints are meant, but I was unable to find a reference anywhere to a female saint on either date.  Interestingly M.14 (DB Id: 164) also includes Pope Theodore, listed as a Virgin.

Morgan Library W.29 is a small, pretty book of hours from somewhere in northern Italy, perhaps Ferrara, as per the catalogue.  The calendar is not very well done, there are only about 120 days populated, and the scribe did not use the ruling from the date info columns, the left with the dominical letters and the roman dates, when writing in the saints, so they do not align directly with the dates.  This amplifies the large number that have ended up on the wrong date, for example the entire second 1/2 of July is offset by one day.  There are also a few spurious entries, for example a "Vigilia" floating above the "Circucisio dni" entry on Jan 1.

Some more from the Morgan Library, I was able to work through 13 books in 2 days, though M.1172, despite being lovely, is without a calendar.  The first added, M.1052, is from Naples, as testified to by several saints in the calendar as "neapli" (See Severi, April 30 or Eusebius, May 23).  A colophon on f.190r dates it to 1483, "finis. M.cccc..lxxxiii. die xi mensis.Marcii".  The calendar is unusual in its population, a large number of high-importance feasts in an otherwise sparse calendar:  70 red saints, 50% of the populated dates.  One would expect between 30 and 50 saints in a normal Italian calendar of approximately 200.

The manuscript is in a poor state of preservation, the binding is split and there is much evidence of water damage.  In the calendar the red text has bled, whereas the black text has flaked.  Although there is no available image of the calendar pages, f.13r has the annunciation, a jeweled border and a small block of text, giving a feeling for the book.  The entire composition is surrounded by a "shredded" blue border. 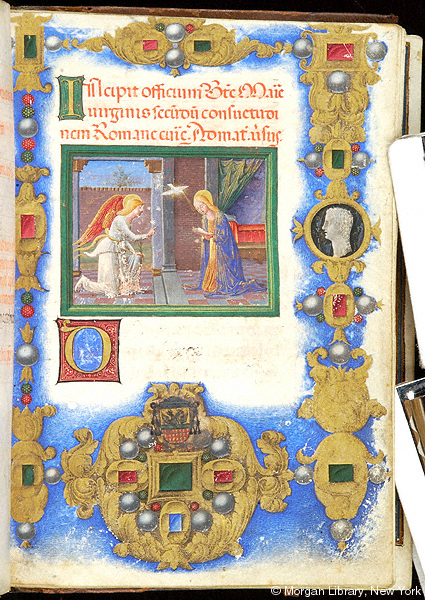 BPL MS q.med 131 (not available in their online catalogue), is a tiny (largest dimension is <4"), early (1320-1330) book of hours, Fransiscan Use, from Camerino, Italy.  Despite the small size, the calendar is clear and readable where the ink is preserved.  In addition to the feasts, there are notations of the signs of the zodiac in the calendar along with some liturgical notations, for example the earliest and latest dates for easter, and even the equinoctes and solstii.  For an early calendar, the date range is unusually narrow due to notation in a later second hand, which has added some saints through the yeat, of the date 1338 at the end of April (see f.4v below).  The 190 saints are irregularly spaced through the year, for example none in April before the 14th(see f.4r below), and the calendar is imperfect, there is no line for the 18 Kalends of October (Sept. 14). 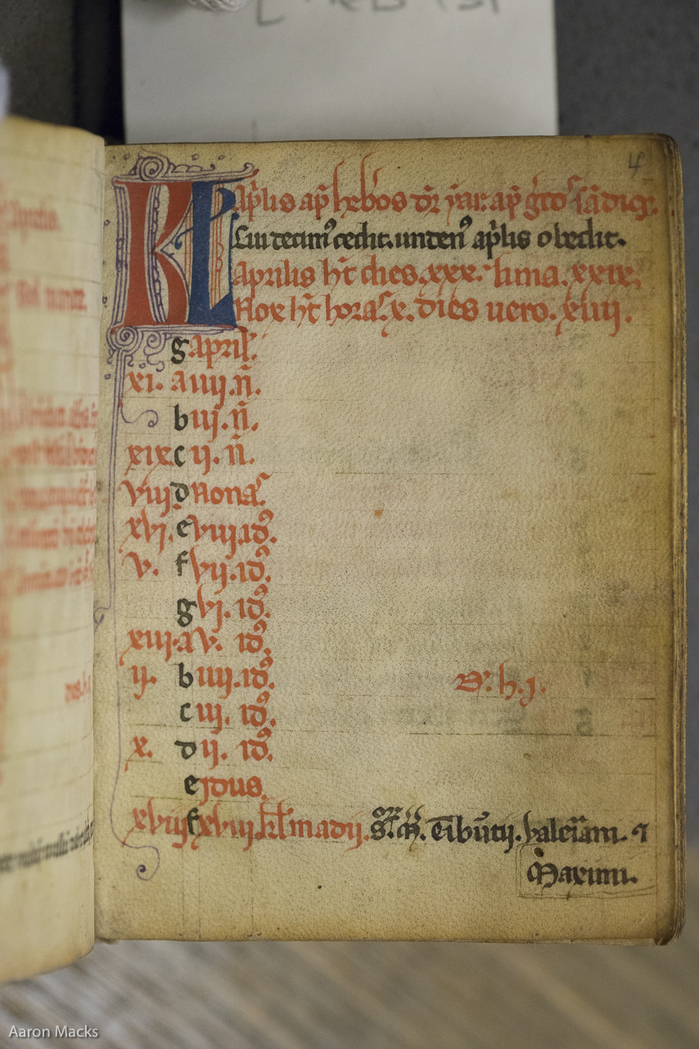 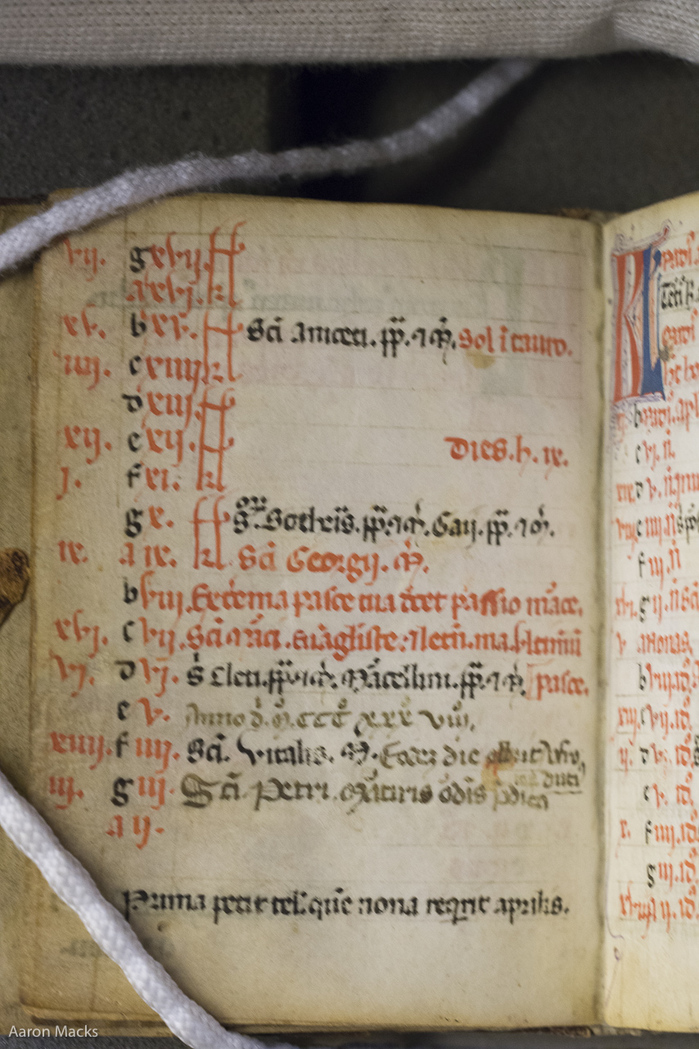 Harvard's Houghton Library MS Typ 553 is a weird Use of Rome Book from the late 15th century, only localized to "Northern Italy".  The calendar is unevenly populated, 5 saints in March compared to 20 in January, and has a very large proportion of "high" importance (red) names, more even then normal rank saints. In addition to the usual saints, there are also most of the zodiac signs indicated as well as some here to for yet unidentified liturgical indications(see line 12 in May, f3r below).  The scribal work is also unusual, there is no horizontal ruling at all, so the saints are often not alligned with the date information. 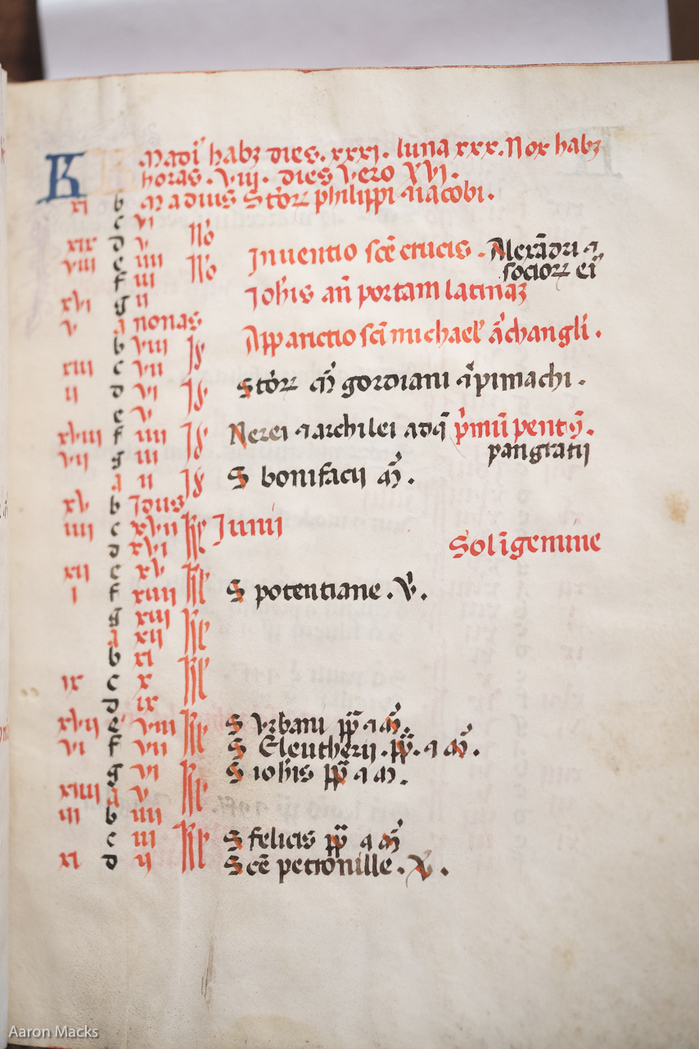 These are the last two of the Morgan Library books from my recent visit, so we'll be back to sharable images soon.  M.80 is a beautifully calligraphed Milanese manuscript written by Sigismondo de'Sigismondi in a flourishy Italian Gothic.  The calendar is rather unremarkable, nothing out of the ordinary.  M.1083 is a Florentine book, possibly by Antonio di Niccolò di Lorenzo.  The calendar is not terribly unusual and the manuscript in general doesn't stand out.

If I can't share any of the calendar pages from M.80, here's at least the start of the Hours of the BVM, f.13r. 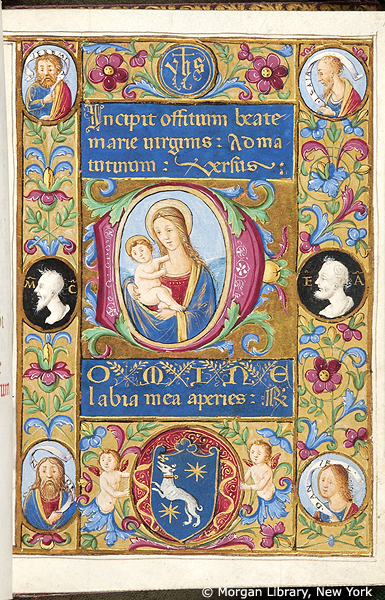 Two more of the Italian books from the Morgan Library have been uploaded, M.57 and M.315.  M.315 is interesting due to the number of Vigils, several not previously seen in the Corpus.  M.57 is more unusual in terms of decoration, it has the red/blue/gold (red and blue alternation for normal saints, gold for high-value saints) that is usually associated with Parisian complete calendars, but unusual in an Italian, 1/2 filled one.

Another of the Books from the Morgan Library, M.311 is a northern Italian, perhaps Florence or Sienna, manuscript from the late 15th C.  Though not marked as such in the catalogue, the calendar has a strongly Augustinian focus, with a Vigil for his main feast when there aren't even Vigils marked for all the Evangelists. The calendar has very little metadata, lacking Golden numbers, roman dates and Julian dates, it only indicates the Dominical letter.

(As with all Morgan MS, my images cannot be posted, so we are left with f.13r) 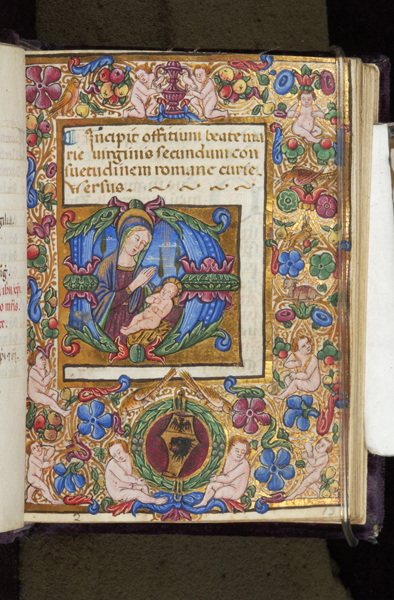 Morgan M.227 is the first of six Books that I transcribed in the reading room of the Morgan Library in New York.  Although pictures are allowed for personal reference, I'm not allowed to post any of them.  This is a northern-Italian book, thought to have been illustrated by Taddeo Crivelli, was made in Ferrara around 1461.  The calendar is about 1/2 filled, and almost entirely undecorated.  The "section" of the Roman month (Ides, Nones, Kalends, etc)i sindicated by a 2-letter abbreviation, stretched to fill several lines of the calendar, which gives the page an unusual look.