The second manuscript from the backlog is from a new archive, the Beinecke Library at Yale, one of the largest collections of medieval manuscripts in the US. MS 663 is an early 16th Century Book from Tournai, now in Belgium. The calendar is almost entirely undecorated, only gold and colored KLs to start the month, but the overall manuscript has a large number of complex miniatures.

An interesting bit of scribal practice is revealed errors in the calendar. January begins on f.4v, so that each month is a complete opening, however the second half of January, properly f.5r, is on f.4r. This points to scribal error, possibly the scribe noticed that he had mis-copied Anthony (1272) as a Monk on January 17th, where he should be properly a Confessor, Abbot or Hermit. Since the recto was not needed before the start of January, he was able to save the parchment without the need to scrape it. Why the second half of the month would have been done before the start is unclear, but since the red ink is missing from f.4r, this seems more likely than that he put the first part of January on the back of the wrong leaf.

The calendar entries are extremely accurate, with only three noted errors, all of which are at the start of the month. Due to an error in the layout of the page, the short verses for June take up the space of the first of the month(see f.9v below). The entries for June 1 (Nicomedes) and 2 (Peter and Marcellini) were shifted to June 2 and 3, to compensate. More interesting is Brigid, usually February 1, appearing on January 31. Shifts across month divisions are extremely rare.

Finally there is a bit of a mystery in the calendar, October 9 has Bishop Dyonisus, the most common name for the date, in black ink, followed by a word I read as “mesda”, in red. I’ve been unable to find a useful meaning for this word. 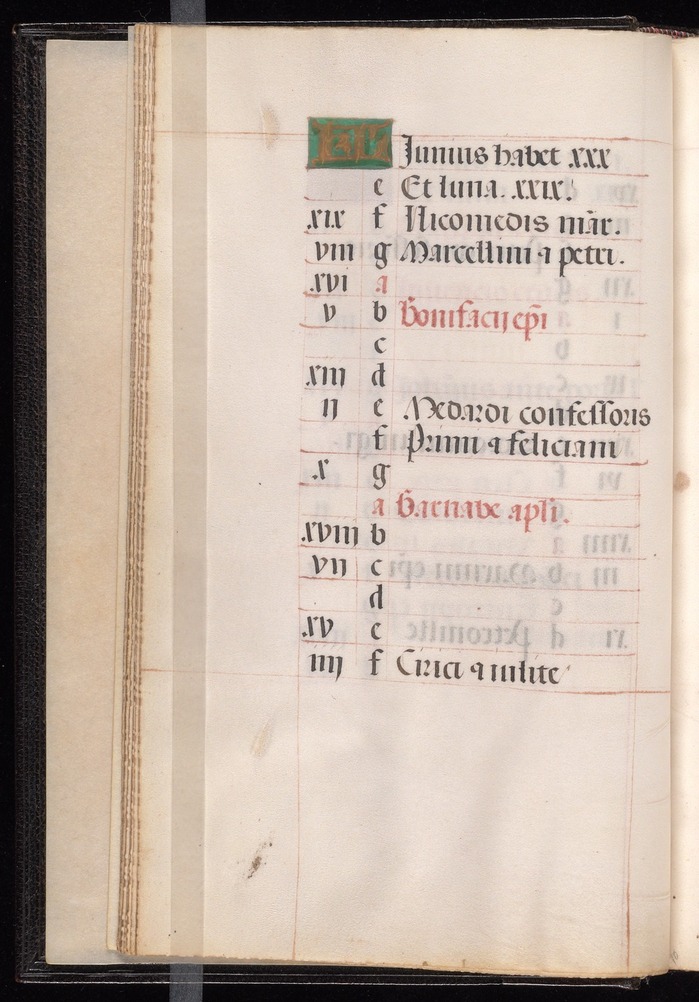